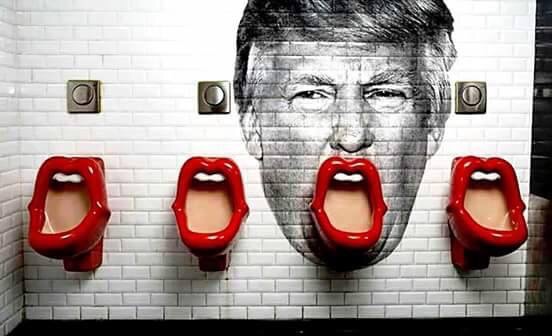 We think it time for the media to wake up, take responsibility, and stop giving free publicity to Donald Trump– an arrogant, anti-intellectual misfit.

Based on his recent unAmerican activities it’s time for even bigoted folks to stop supporting him.

The rally where his goons assaulted a BLACK LIVES MATTER protester was the final straw.

Trump’s getting Secret Service protection, yet allowed another human being to be attacked at his(seems like), KKK rally.

This is TOTALLY unacceptable for an American candidate running for executive office. One has to think his state of mind can’t be right, or serious to believe this is what the MAJORITY wants?

Do we really need him to undo work the president has accomplished?

President Obama made great progress despite a racist Congress committing acts of treason, and sedition in their failed attempts to stop him cold these past seven years. They plotted for his failure.

President Obama instead, saved the nation from the brink of economic depression caused by George Bush. He got Osama Bin Laden. He’s taken out more international terrorists than Trump’s had ex-wives. I don’t think Donald ever got over the roasting POTUS last delivered him.

So, it’s about this big mouth, trying to get even. We can’t even let him begin to fantasize about moving into 1600 Pennsylvania Avenue.

Well, that’s his game plan. The real deal is Trump would force fascist type restrictions on Americans, immigrants, Muslims, and as he referred to us, ‘the blacks!’

Trump’s a narcissist, and we don’t need that in our president.

He’s unfit for the job, and would probably make America the most hated nation again after George Bush, Jr.

We don’t need him in the OVAL OFFICE!

The vast majority of sane people know what a disaster this would be!

Imagine ‘the Donald’ knowing nuclear codes, let alone any orders he might give federal agencies, and the military.

Electing Trump PRESIDENT would be a nation committing suicide.

If the American people as a WHOLE are so self-destructive as to give this mean-spirited birther the GOP nomination, you know what time it is…

A one-per cent(er), ignorant rich white guy wants to buy the highest office in the land.

We, the people, must reject him. Trump just wants to get even with the current president. He wants to destroy all of “his” programs, such as the Affordable Care Act because he HATES this gentleman leader who has remained strong despite Trump’s BIRTHER comments about President Obama’s birth certificate, grades, and intellectual ability as one of ‘the Blacks’ he really can’t compete with.

Saying he wants “America to be great again” means America to be white again.Those days are over. 2050 the white American will be a minority, and that, quite honestly is his, and other bigot’s real fear. It’s Karma.

Trump’s obnoxiousness would never have been tolerated in a Black man named Obama.

So let’s end his WHITE PRIVILEGE- (to insult—even the disabled), just because he’s a rich bigot.