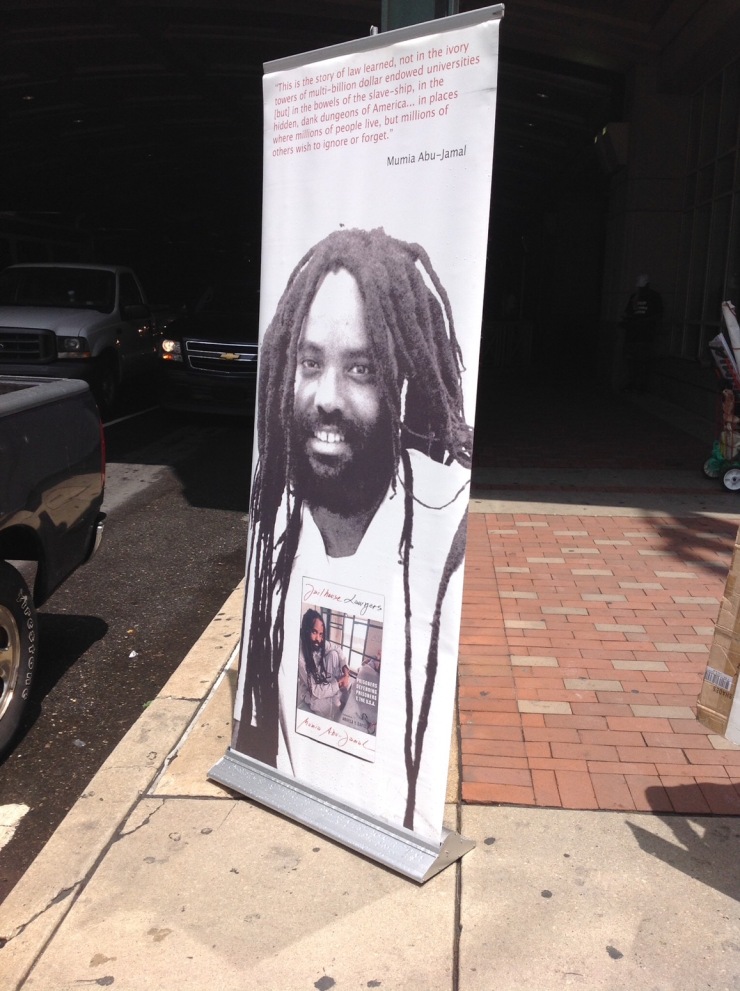 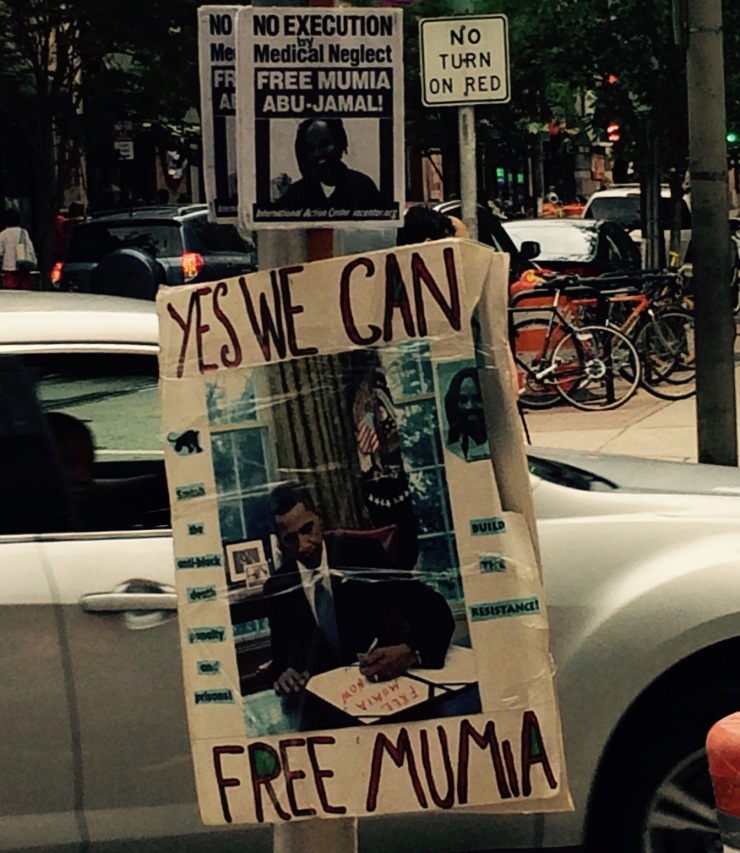 PHILADELPHIA, December 9, 2015 – On the 34th year of Mumia Abu-Jamal’s wrongful incarceration, his supporters will hold a freedom honk on the west side of City Hall at 4:30PM, and a teach-in on the case and his medical condition at 6:30PM at 1315 Walnut Street. Simultaneous demonstrations will also be held at the Harlem State Office Building on 125th Street and Adam Clayton Powell in New York at 6PM; in Mexico City; Paris, France, and Heidelberg, Germany among other cities around the world. In addition a film screening of Justice on Trial: The Case of Mumia Abu-Jamal will be held at the A-Space on 4722 Baltimore Ave on December 10th.
Abu-Jamal’s supporters are gearing up to travel to Scranton, PA on December 18, 2015 where US Federal District Court Judge Robert Mariani will conduct an extensive public hearing on Mumia’s medical crisis.
According to Pam Africa, “The fact that the Judge has asked for a testimony from Mumia at this hearing is a victory. Our consistent protests, here and around the world –against the inhumane denial of proper medical treatment for Mumia and others who are being sickened by the prisons –are being heard.”
“It took an informal visit from a movement doctor to determine the cause of Mumia’s medical crisis. That doctor determined, just by eye balling Mumia, that the problem was his untreated chronic and active Hepatitis C. But now the Department of Corrections is withholding treatment until the final stages of the condition. In other words, until it’s too late to save him,” said Johanna Fernandez of the Campaign to Bring Mumia Home.
“A legal victory in Mumia’s medical case will also be a victory for the other 10,000 PA prisoners afflicted by Hepatitis C, who have filed a class action suit,” said Suzanne Ross of the Free Mumia Abu-Jamal Coalition (NYC).
“Mumia Abu Jamal was viciously attacked and framed by the Philadelphia police 34 years ago, but in light of the current attention on police violence and corruption across the nation, the truth in this case will surface among a new generation of freedom fighters. Our work is not done until he is released,” said Ramona Africa, survivor of the MOVE bombing of 1985.
Immediately after the end of Abu-Jamal’s trial in 1982, 15 of the 35 police officers who collected evidence at the crime scene of Officer Daniel Faulkner’s shooting were convicted and jailed on charges that included graft, corruption, and tampering with evidence in hundreds of other cases. Chief Inspector Alfonzo Giordano, who led the crime scene investigation in Mumia’s case, was among those officers. But the jury that heard Mumia’s trial was not aware of these rampant police practices, so they believed what the police said at trial.
The photographs of the crime scene taken by freelance photographer Pedro Polakoff, discovered in 2006, demonstrate the illegal methods employed by the police in the Abu-Jamal case. In the Polakoff’s photos, Officer James Forbes, who testified in court that he properly handled the two guns allegedly retrieved at the Faulkner crime scene, is seen holding the weapons with bare hands. In 1995, an investigation of the Philadelphia police department discovered that practices like these were widespread in Philadelphia. Amidst the scandal, former Philly DA Lynne Abraham told the Legal Intelligencer that her office would “discard any cases where evidence surfaces that even one of the officers involved in an investigation lied in court or in written reports.”
Because of the uninterrupted history of judicial and prosecutorial corruption and police conspiracy in this case and because of widespread evidence of Mumia’s innocence, his supporters call on officials of Philadelphia to make good on Lynne Abrahams’ promise through the immediate release of Mumia Abu-Jamal.

African Proverb: When you are playing with a dog, do not ever forget to keep a stick within reach.