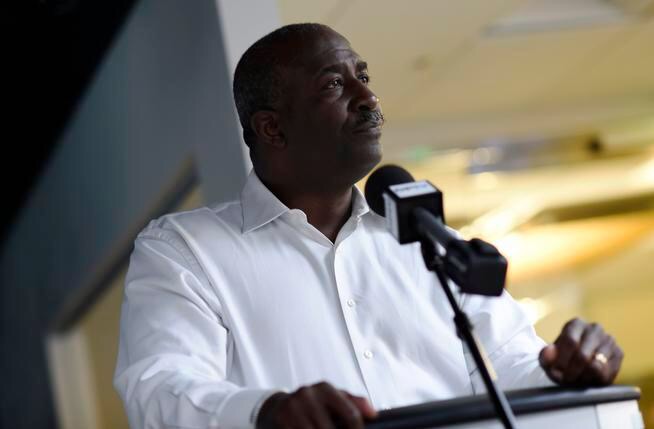 WASHINGTON (March 15, 2016) – The National Association of Black Journalists (NABJ) congratulates Gregory L. Moore for 14 years as the top editor of the Denver Post, though his departure is the latest of several black journalists leaving high-profile jobs in recent months.
Moore, 61, announced today that he was resigning from his job effective April 1. The paper won four Pulitzers during his tenure.
“I enjoyed every minute of my 14 years as editor of the Denver Post. I believe I opened our pages to people of all races, gender and generation. I like to think The Post was a force for good in their lives and made this community better. I leave with a grateful heart, on my own terms and with no regrets,” Moore told NABJ via email.
According to newsroom census figures kept by NABJ, Moore was one of 22 newsroom leaders of color at daily newspapers at the end of 2015, including five publishers, nine editors, and eight managing editors.
“While we celebrate Greg’s success and wish him well on his future endeavors, as an organization that represents black journalists and advocates for more diversity in the newsroom, it is disappointing to see a continuous decline in black newspaper editors and top leadership,” NABJ President Sarah Glover said.
Moore’s departure follows closely behind the announcement that John X. Miller, managing editor of the Winston-Salem Journal, will soon be leaving the newsroom as its top editor to join The Undefeated an ESPN project. Similarly, Kevin Merida, who until November was managing editor at the Washington Post, left that job to run The Undefeated.
“I was an undergrad when Greg Moore became editor in Denver. His impact on helping that paper tell Denver’s diverse stories was, and continues to be, evident through his hiring and the message he preaches,” said Marlon A. Walker, NABJ’s vice president of print. “I hope whoever takes his place thinks along those same lines.”
A former NABJ regional director from 1992 to 1995, Moore was honored by NABJ with the 2013 Lifetime Achievement award. He was also awarded the 2011 Robert G. McGruder Award for Diversity Leadership from the Associated Press Media Editors.Moore helped shepherd the Boston Globe’s investigation of pedophile-priests. The investigative pieces became known as “Spotlight,” which was made into a film and won an Academy Award.
About The National Association of Black Journalists:
An advocacy group established in 1975 in Washington, D.C., NABJ is the largest organization for journalists of color in the nation, and provides career development as well as educational and other support to its members worldwide. For additional information, please visit http://www.nabj.org.
National Association of Black Journalists