Watching “March for Our Lives” I thought of Tah/Raymond Rogers. The fact his life was taken by a gun over 19 years ago shocked, stunned, and almost destroyed our community.

Yet none seemed to care how this affected his love ones, and the Lost Boyz…and what kind of evil strikes like this, especially on a brother-man’s birthday?

Evil doesn’t care. It seeks to destroy unity, and the bond Cheeks, and Tah shared was special.

The LOST BOYZ dance is still hot, and were often featured clips of my best camera shots as we admired how they vibed off each other’s energy.

Next month, UNSUNG will feature the LOST BOYZ episode telling their story with interviews, and sharing quite a few of my photos/video clips of their early days performing.

No grief counselors came to South Jamaica, Queens, an area where guns somehow found their way. No media to monitor what was happening. So, instead of fist fights, guns were used to settle beefs. How did so many weapons get here?

Is it that deep, my brothers?

The Klan type loves it when you kill your brothers, and sisters. Less work for them.

Yet, in happier times, the LOST BOYZ were frequent guests at SOB’s when uncle Gil performed. In the audience one night, Tah’s shouts caught Gil’s ear, and he smiled, looked at them, and realized it was a holler of approval.

Yet, Gil too was caught off- guard, and the news stung as he kept asking me; “What happened to Tah?”(more on this in the book).

This heavy hurt, and pain we’ve endured the past years has now mushroomed to mass murders instead of one.

Now, multiple families grieve. Now people are paying attention. Back then they thought this was a ‘black pathos’ thing.

They thought guns ‘were only in Black neighborhoods’ but that was never true.

And whether it’s a A-15, or not it’s still was a gun which took Tah’s life, and denied his children their father.

However, the only comfort is knowing if you believe the Son of God gave his life for all-don’t despair; we’ll see you again, one day, my nephew! 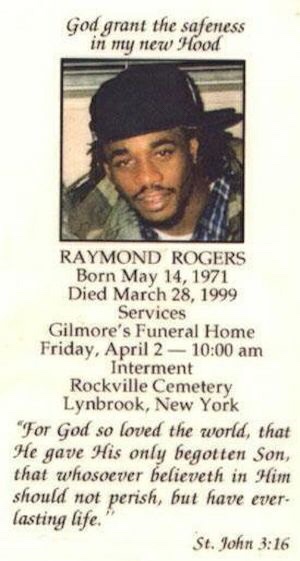